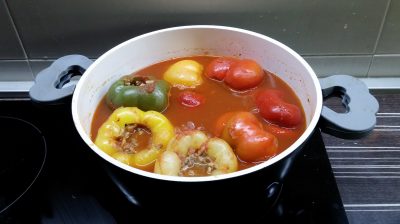 Stuffed bell peppers are a staple of cuisines of several southeast-European countries, including Croatia. This recipe, originally published in Croatian, presents how I make them. The translation will hopefully help this lovely Croatian dish reach a wider audience.

In Croatia we typically use the bell peppers of the “babura” variety, but other kinds of bell peppers will do nicely, as long as they are of reasonable size – at least 2 inches in diameter, and 4 inches or more in height.

Let the cooked peppers rest for at least an hour. Serve with mashed potatoes and some crusty bread.

Do not throw away the puree in which the peppers were cooking. If some remains uneaten, freeze it and use it as stock for a future dish.